Hey everybody! I'm River, the coding guy from the Glitcheon dev team, back to check in and provide a new progress report for Glitcheon development. We've got my imaginary fan back to guide us with some targeted questions, and this time we're also going to answer some of your questions too! :O

If you'd like your questions answered in the next one, feel free to drop them in the #questions channel in our Discord, or @ us on twitter (@GlitcheonGame).

What's been your primary focus since our last scoop?

Recently we have been focusing on leveling up our level design tools and overall workflow.

This has been a process for the entire team, as I (River) have been focusing on custom tools to make it faster to build and modify levels, Yän has been making new staple building blocks for the levels, and Bonicle has been working on some new prototype level sections that really work well with the latest changes to abilities and their new modifiers. 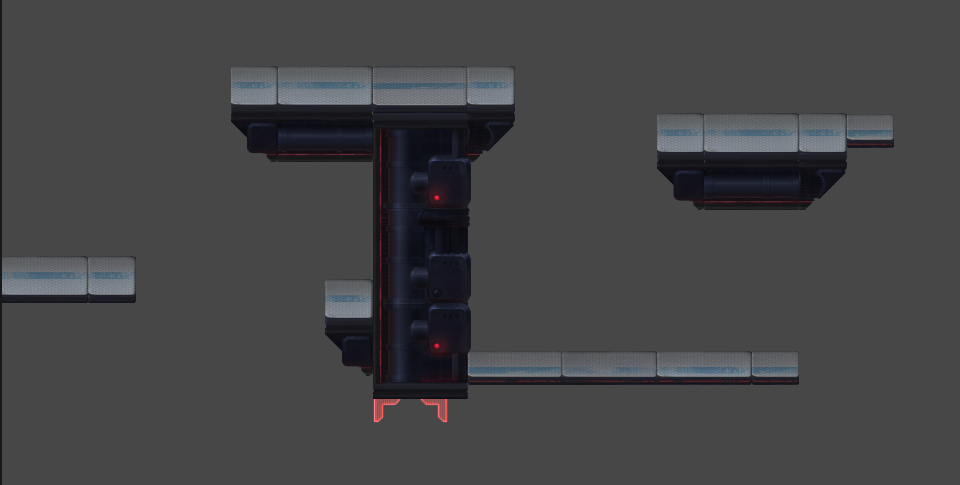 Some of Yän's new tiles integrated into our test scene 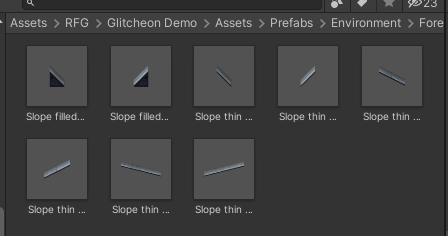 I am generally a proponent of not re-inventing the wheel, and as such we did quite a bit of research and experimentation with existing tools to see how we could improve our level design so it could be done better and faster, and what we found is that our requirements really are quite unique, and they need a custom solution.

Here's a quick look at the tool I've been building

I expect that we will continue to iterate on the tools we've made, but in the past month we've definitely seen great improvements in what we can do and I hope it will be a solid foundation for moving forward.

What will you be focusing on next?

We are at a point where we need to make some hard and semi-final decisions on some major story and plot points before we get too deep into designing new levels. We of course have many ideas and a lot of story elements we've talked about that didn't make it into the demo (at least not in an explicitly obvious way), but there's not too much set in stone.

Over the next few weeks, we are challenging ourselves to ask thought provoking questions about the world and Glitcheon's part in it, and then come up with cohesive answers that can be incorporated into the game's story and lore. So far, it's going very well, I think, but we have a ways to go!

Some of the lore-questions we've been discussing so far. Have some of your own? Send them our way!

If any of you all have questions for us about Glitcheon, The Forum, or anything else in the game's story  or lore, please send them our way! However, don't expect an answer for those questions (yet). ;)

What was the inspiration for the game idea, and how did that idea evolve up until now?

The idea was originally formed as a response to the game jam theme of "intentional bugs" in Jonas Tyroller's Wowie Jam 2.0. We wanted to do something fairly ambitious in the 72 hours we had for the jam, and spent probably an hour coming up with the core concept and some details about how we would implement it. The idea was initially documented as this:

"Metroidvania where you need to escape cyber-prison(?) by creating bugs in the system" 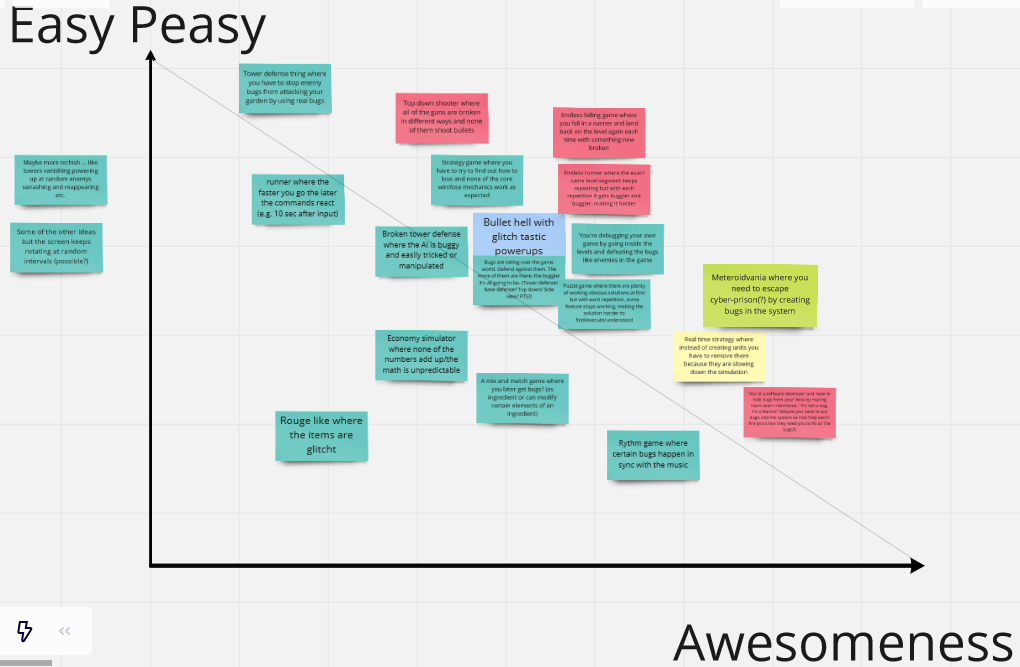 Our initial ideas for the game jam: We decided to go with the green card but it could have been any of these!

Of course after the jam, we decided to continue working on the game and invited others to join our discord server and share feedback during the process. I can't speak to every way the community has helped to evolve the game off the cuff, but I can say with certainty that it wouldn't look or feel the same without you.

Since the jam, we expanded on "cyber prison" or edited that idea to actually be associated with a mega corporation known as The Forum, and the ideas have been pouring in since then, to the point that the game feels significantly different now and actually has lore (and soon™, a plot and fully fleshed out narrative).

What are you guys using to plan out stuff, with all those notes and stuff?

We use an online tool called miro, which allows us to drop shapes, text, sticky notes, etc. and even draw directly on a shared white board.

Recently we also started using trello for task assignment and tracking, but we still use miro a lot for the free form of expression for any sort of ideas we want to convey.

Will you make an official guide?

We don't currently have any plans to make an "official" guide for the game. However, I think it's likely that if there were to be a Wiki in the future, especially when we release the game, you would see us helping to maintain that sort of information.

Right now it's hard to pull away from actually doing the thing to write about it in that way, especially since many elements of the game are still subject to change or not yet implemented.

Let us know if you'd be interested in an ingame guide like the ones in games like Mario Odyssey or Metroid Dread though! We may or may not do something like that if there's an interest in it.

Do you have anything else you want to share?

If you'd like to learn more about something or engage with us and our community more directly, you can join our Discord! We have an announcements channel in there you can subscribe to which will let you know all sorts of cool stuff, like when Yän streams dev work, when one of us releases a new project, when new dev logs drop, and all sorts of glitcheon-news.

Thanks for your questions this time around, and I look forward to sharing more in the next one.

I just realized it's kind of weird we don't ask people/encourage them to also send us their questions in the comments of the dev log. 😅

This is not a comment, this is a declaration of war