Hello all! It's been a while since we've been able to provide a nice progress report for Glitcheon development. River's Imaginary Fan has really been pushing us to spill the beans, so we subjected ourselves to an imaginary interview that we'll share with you now.

If any of you real people have questions for us that you're looking to have answered, feel free to drop them in the #questions channel in our Discord, or @ us on twitter (@GlitcheonGame).

Wow, you guys have been kinda quiet. What's been going on?

That's true… since we released the demo update for Newgrounds, I don't think we've shared too much about what's going on internally.

There are several reasons for that, and we've all had some personal things going on… for instance, River and his wife bought a house, Bonicle moved to another country, and Yän… well, Yän took multiple vacations and remixed a lot of Castlevania songs. Not quite the same, but that's likely why Yän is really pushing us to get the ball rolling quickly again.

Despite what we've had going on, we have been meeting routinely, doing lots of planning, and we are starting to make real tangible progress towards the full release.

Lots of planning is going on!

Full release, yes! Tell us more about that.

We are actively working on the full release for Glitcheon!

If you've played it before, what you experienced was our demo, which is a reasonably large vertical slice of what we intend to offer in the game.

What some of you may not know is that so far, we've released everything we have done. In other words, when we built the demo and released it, that was the entire game so far.

As you can see, the content we made for this demo is already a lot! (and this is just Yän's assets)

Now with our demo available on a variety of platforms including itch.io, Newgrounds, and Crazygames, we're finally looking ahead.

We can't answer questions like when the full release will be finished yet, as we are still working on answering a lot of questions internally that will heavily influence decisions like that.

We do have some pretty hefty goals for the full release though, including making the world much bigger, adding more characters, fully exploring the story/narrative that the demo hints at, designing more interesting level and enemy interactions, adding new abilities,... I could go on.

That sounds like a lot… what are you working on right now? [SPOILER ALERT]

Rather than talking a lot about what we can't talk about, we do want to share with you one of the things we have been working on since the demo that is coming along quite nicely: ability modifiers.

In the demo you will have become familiar with the Error Platform, Glitch Pulse, and Ad Unblocker abilities. These abilities are introduced by interacting with terminals found throughout the along the path of the main story.

In the full release, we are also planning to have terminals or similar features that grant the player the ability to toggle on/off modifiers for their abilities. These could give some significant advantages (and disadvantages). 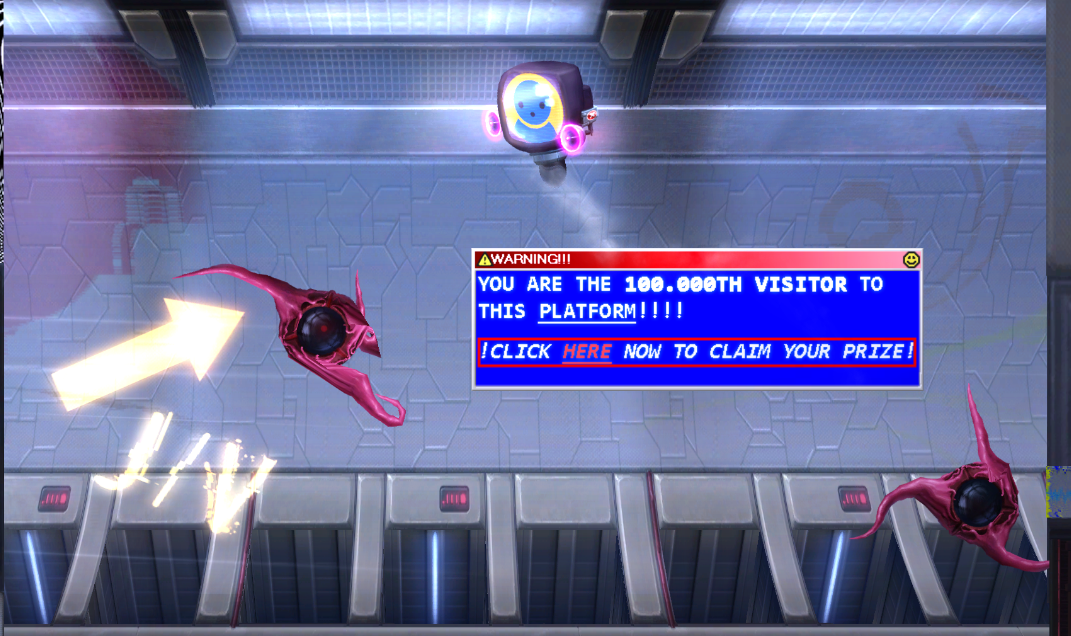 What is this? An ad? An error platform? An error adform??

For one example, there is currently planned to be a modifier that allows you to use two error platforms before touching the ground. However, being that this is producing more errors/glitches simultaneously, the behavior is also more glitchy as a result… so in addition to being able to have two of them, they are also less stable and start falling in the level shortly after appearing.

Two for the price of one!

That sounds pretty interesting… when can we see those in action or try them out ourselves?

As far as seeing them, Yän is planning to do more live streams on his Youtube channel starting most likely in January where he'll be able to share more details (spoilers) and hopefully collect your feedback.

Trying them out yourselves… we're not sure. We are definitely going to want playtesting and beta builds going on for the full release, but it may be in a different format than we did for the demo. That's something we'll have to talk about more as we get further along.

What are you going to be working on next?

There's so many directions we can go in, and at the same time there's some things we probably want to remain hush hush about.

However, it's definitely clear that we need to spend more time soon on narration for the story and world building.

Another area we are working on is fleshing out our level design tools so that we can build bigger, better levels that feel more seamless without Bonicle losing all of his hair in the process.

One of the level design tools we've been working on, using Unity's sprite shapes: Hazards can now take all kinds of shapes!

Do you have anything else you want to share?

Expect to hear more from us, and more often. This format is something we're going to try out and assuming it goes well, we'll try to do a dev log of some sort at least once a month.

Thanks again to River's imaginary friend for all those interesting questions. Now go and write some of your own so we have some from real people for next time!

Because I'm the first person to like here I can't say anything other than...

Something is off here, I think you need more ds.

Because I'm the first person to comment here I can't say anything other than...